Future of work tends to come out in snippets – a piece here, another there. It’s hard to find a comprehensive picture. A recent literature review that covered over 250 studies made it easier to visualise and in doing so, inform new interpretations. 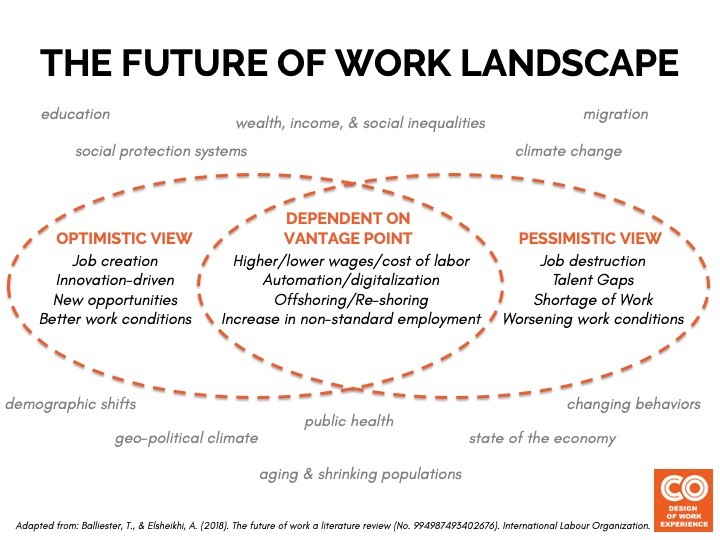 In the interpretation of the literature, three overlapping spaces emerged: the optimistic view of FOW, the pessimistic view of FOW, and an overlapping section that can be classified as either positive or negative depending on one’s vantage point. The elements within these overlapping circles are specific and directly related to work.  New job creation, being innovation-driven, new opportunities, and better work conditions are among the potential up sides around the Future of Work. On the other end, the Future of Work could also lead to a number of downsides: job destruction, talent gaps, shortage of work, and worsening work conditions. One’s vantage point (i.e. location in developed or developing country, status and standing in the labor market, on the winning or losing end of things, included or excluded) determines whether higher/lower wages/cost of labor, automation/digitalization, offshoring/re-shoring, or non-standard employment arrangements are a good or bad.

Future of Work doesn’t just encompass the type and quality of work, but also the ebb and flow of industries and sectors in the ever-changing context of the world. That context includes education, social protection systems, wealth, income and social inequalities, climate change, migration, demographic shifts, geo-political climate, public health, aging and shrinking populations, state of the economy, and changing behaviors. All these factors simultaneously affect and influence each other, as well as the Future of Work. The permeable boundaries are represented by the dotted lines above.

One of the most common predictions is the dichotomy between the destruction vs. the creation of jobs due to automation and digitalization. To explain: the transportation, agriculture, manufacturing, and administrative industries are most likely and will continue to (in some cases) to automate or digitalize. On the other end of the spectrum, the creation of new jobs will likely come in the areas of climate change and the green economy, blockchain, engineering, healthcare, artificial intelligence, robotics, and even local service occupations.

The conclusion drawn by some is that the downsides of job loss are outweighed by the benefits of job creation.  Being successful in the Future of Work is dependent on human traits, such as creativity and emotional intelligence, as well as the development of cross-professional skills to remain competitive.

Another prediction is about the Future of Work’s impact on what’s called "social protection systems." These include public services such as healthcare, social security, and education and the legislation/regulations surrounding them. Ideas such as Universal Basic Income or portable health and pension plans are being proposed as possible responses to the Future of Work.

One more example is the rise in non-standard forms of employment, which include independent, freelance, and gig workers. There’s discussion of the positives (such as flexibility, autonomy, and self-determination) and a lot of the possible negatives: less security, no ability to negotiate, lower wages in the so called "race to the bottom", unsafe working conditions, lack of career development, additional managerial demands, and—of course—changing the definition of work itself.

These are just a few of the many predictions around the Future of Work and the discussion and logic behind them. The takeaways here are certainties:

Whether the Future of Work is utopic or dystopic is still to be determined, and collectively up to us today. Knowing the full scope and scale of the landscape is a start.

Author: Ananya S Guha A lot is being discussed on online learning. Some argue that this will come to stay, while others say that because…

An open letter to the leaders of HBCUs: How to sustain and support a successful future

Decolonising the business curriculum in the era of Black Lives Matter

Racial inequalities in the accounting profession

"There are no easy fixes, and the journey will be long and hard, but it is a necessity if we wish to exist equally together" Author: Dr…

Author: Organisational expert Karen Jaw-Madson is principal of Co.-Design of Work Experience and author of the Emerald title Culture Your Culture:…

America cannot be great when Black lives do not matter

Images of violent police clashes with protestors from Los Angeles to Atlanta, and Minneapolis in between, can easily be mistaken as riots in any…

Be empathetic, be compassionate, be kind

Author: Logan HartnellAdler University, Chicago, Illinois, [email protected]_Lhartnell In the midst of an international health crisis, many of us find…