As artificial intelligence (AI) technology enters the mainstream, it is encountering both unintended consequences as well as limitations. Enter decision intelligence (DI). Author Lorien Pratt discusses the new technology and scientific discipline that takes AI to the next level.

So DI is a coin with two sides: technology – if that’s your area of interest – as well as the decisions we all make, every day, hundreds or thousands of times. DI connects these two realms and is the breakthrough technology of the decade.

Emerging, unusually, not from academic departments but from commercial companies like Google (which has trained over 17,000 engineers in DI) and my company, Quantellia, DI boasts dozens of vendors today and a growing list of success stories. And, in an important sign of the times, Alibaba – the world’s largest retailer – also runs a decision intelligence research lab – a step that is, so far, unparalleled by western-based companies.

Simply put, DI is the science and technology of understanding how actions lead to outcomes. For this reason, DI could have just as easily been called “action intelligence”.

Take, by way of example, one of the world’s largest banks. With locations in 53 countries, upgrading the telecom technology for this massive transnational was a massive undertaking. To maximise the benefit of this transformation while minimising costs, the bank built a giant database containing all information about the programme. The database was, however, missing a critical element: an understanding of the chain of events that each scheduling or resourcing action set in motion – with impacts on contracts, engineering, and more. The reason: like the vast majority of databases today, this one was missing cause-and-effect links: the knowledge that an action taken in one place would have a consequence in another. Introducing a decision intelligence solution saved the programme and resulted in substantial cost savings.

Other examples include Xylem Inc., which used decision intelligence to achieve a 23% decrease in water consumption for the city of Fountain Valley, California and $160,000 a year savings for the city of Park City, Utah. New York City-based Urbint has prevented multiple gas leaks with its DI solutions. And NASA’s Frontier Development Laboratory used DI to build a system that decides the best action to deflect an incoming asteroid.

Millenia in the making, DI is crystallising this year

With roots in many fields, including Cybernetics, Systems Dynamics, Complex Systems, Behavioural Economics, Strategic Foresight, and more, DI was recognised recently by Gartner and Forbes. It was fictionalised on a recent television episode of The Good Place. And my book, Link: How Decision Intelligence Connects Data, Actions, and Outcomes for a Better World, is the first (of many) that are in the works.

Last year, the New York Times published the following graphic, showing Turing Award winner Yann LeCun’s view of which problems have and have not yet been solved by AI. As shown there, contextualisation, cause-and-effect predictions, and decision-making are highlighted: not coincidentally these lie at the heart of DI.

Getting started with decision intelligence

You can understand DI and get going with the basics in a matter of minutes, in three steps:

Much of the power of DI comes from these simple steps. And just as a car that may be simple to drive hides sophisticated and powerful technology “under the hood”, you shouldn’t be fooled by this simplicity: on the other side of the coin, DI is the gateway to the most sophisticated AI and other technologies available to solve the world’s most complex problems today. 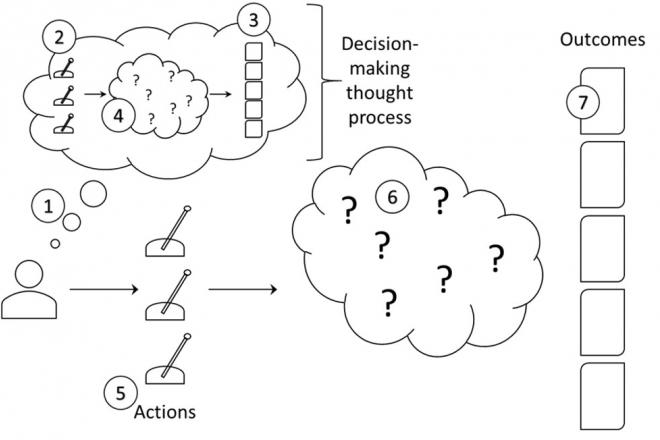 What is a decision?

By way of background, it’s first important to understand what, exactly, is a decision? It’s a thought process by which people think through the downstream consequences of their actions on the future, as shown in the diagram.

This diagram shows that, as you think through a decision (1), you imagine how your actions (2), will lead to outcomes (3), through a cause-and-effect chain of events (4). Then, based on this thought process, you take action(s) (5) in the real world, which leads through the actual cause-and-effect chain of events (6), to some outcome(s) over time (7). Your ability to match the decision to the reality (and to adapt your decision as the external environment changes, which I’ll talk about below) is how you ultimately get what you want, avoiding unintended consequences. 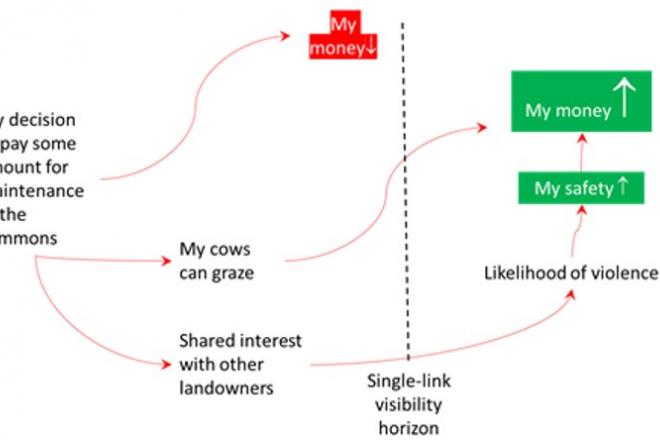 How can I draw a picture of a decision, and why would I want to?

Clearing the “cloud of decision fog” labeled with question marks above with a shared understanding of the cause-and-effect patterns by which actions lead to outcomes is core to how many approach DI. To do that, we draw diagrams like the one below, which shows a decision on the left flowing to outcomes on the right. Illustrating a widespread pattern for many decisions, this one shows that a near-term negative outcome – in this case less money in my bank account – can have a longer-term positive outcome – in this case increased safety and return on investment in a shared grazing space for my cows.

The goal of a diagram like this one is to represent how people naturally think about a decision: a diagram of what would otherwise be explained in words.

If you wish to make a better decision in a complex environment, it’s best to work with a group of collaborators with diverse backgrounds. Ask them to brainstorm the outcomes you wish to achieve. If your experience is like mine, you’ll be surprised to learn that you were not on the same page.  Simply “starting with the outcomes in mind” in this kind of a structured way goes a tremendous way.

Second, brainstorm the actions you might take to achieve those outcomes. Essential here is to not allow any evaluation of those actions (toss in a bad option or two to reinforce this point): you just want to make the longest list that you can.

Simply taking the above steps leads to huge value. Yet you would be surprised at how few organizations omit them, assuming that either a) everyone is on the same page already or b) moving forward with certain actions is a better choice than even taking an hour or so to think through the consequences of those actions on desired outcomes.

The unintended consequences of these omissions can be dire. I have led workshops with teams funded well into the eight-to-ten figures who omit this very simple first step in making good collaborative decisions. I have been both incredibly shocked and also, on the other hand, strongly encouraged to learn that such a simple technique is being omitted.There is so much room for improvement that we have tremendous reason for optimism!

It is difficult to overstate the importance of DI. Because it connects so seamlessly to how humans think naturally, on the one hand, and to the most powerful cognitive tool we have ever built—the data/AI/knowledge/software stack of tools—on the other, DI has amazing potential. Using a simple method, it acts as a “brain assistant to the human race”, helping us to go beyond the current paradigm of linear and mechanistic thinking to a better understanding of the interdependent, multi-link chains of reasoning essential to a modern society. Because it can influence the trillions of decisions that we make every day, DI is one of the most powerful tools for us to act in concert to solve the most “wicked” problems we face. 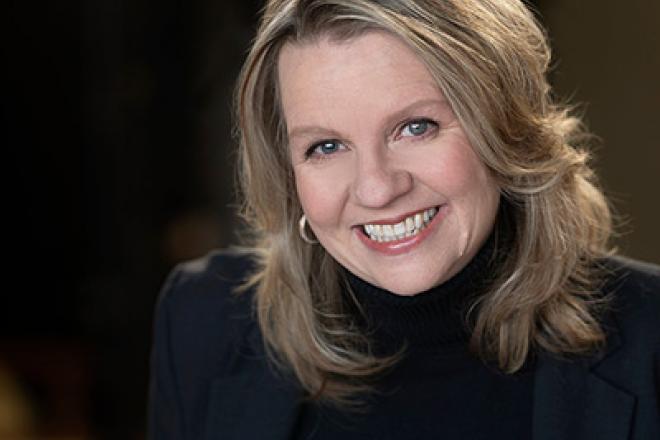 Lorien Pratt is the author of Link: How Decision Intelligence Connects Data, Actions, and Outcomes for a Better World. The book explores the solution that is emerging worldwide to take artificial intelligence (AI) to the next level: decision intelligence (DI) telling the stories of DI pioneers worldwide, along with examples of their work in areas that include government budgeting, space exploration, emerging democracy conflict resolution, banking, leadership, and much more. Find out more on our online bookstore.

Read more about decision intelligence in these related articles.

Read more from Cassie Kozyrkov on Towards Data Science about the new discipline for leadership in the artificial intelligence era.

Decision intelligence has 'left the lab'

Lorien Pratt explores the lessons learned for the discipline from ten years of evangilism on her blog.

Publish in this field

We’re looking to build on the amount of meaningful research we publish in the field of artificial intelligence and would love to hear more about your current research in the area. Find out about our different routes to publication.

Visit our content platform Emerald Insight to explore all our research.