Women’s professional advancement in the pandemic

Mariann Hardey – Associate Professor, Business and Computing, Durham University – talks about career advancement and support for women during the pandemic.

'I wonder what “hacks” you’re using to stack up your “work” hours?' a colleague asked, following up on a twitter exchange with one of my students about my regular schedule – typically starting at 6 am and ending, in front of the screen, sometime around 10 pm, seven days a week

Here are some of my work hacks cultivated from the experience of being a full-time mum to my four-year-old daughter, a full-time academic with a full research and teaching load, and as the University of Durham Principle Investigator to a multi-million pound project that is being coordinated between five different institutions:

Flexible hours and remote working have signalled a new 'normal'. In the early days of the pandemic there appeared a genuine shift in attention concerning the state of work in the home and caring responsibilities that could be divided up more equally within households. However, several studies carried out during the pandemic indicate regressing family structures, with a recent United Nations study warning about the state of gender equality: 'with the spread of the COVID-19 pandemic even the limited gains made in the past decades are at risk of being rolled back'.

While the spotlight is on flexible working allowing many parents to sustain some form of professional role, a major concern is the significant shift of women during the pandemic onto furlough and out of work. Women are more likely to give up their jobs in order to take on household responsibilities, often because they have fewer educational qualifications, less prestigious careers, lower expectations of earnings, and social norms on the role of men and women in the home.

A study from the Institute for Fiscal Studies (IFS) found that British mothers were 23% more likely than fathers to be temporarily or permanently unemployed during the pandemic.

One measure of how damaging the pandemic is on women’s professional advancement will be their ability to return to professional roles. How many will fall through the gaps in the many forms of policy provision?

A most vexing problem

Economists have played an important role during the pandemic calculating the costs saved with increased flexibility and remote working provision and acting as the experts on economic matters concerning national and global recovery. However, the much-praised furlough scheme of the UK Government denies support to self employed mothers. Further evidence of the marginalisation of women from economic and political support during the pandemic.

I am reminded of a contentious law paper by Chong Soo Pyun, published in 1969, stating the monetary value of the housewife (as was the popular term) as an ‘imponderable […] posing a most vexing problem'.

Other sectors report high-earning women with caring roles who have sought to maintain their careers during the pandemic feel they are falling even further behind their male counterparts. A BBC article reports on the 'strong anecdotal evidence of a trend toward senior women quitting their jobs', prompting a close friend to comment how she and her law colleagues are being, 'flung further into the perilous pit and trodden down'.

A BBC article reports on the 'strong anecdotal evidence of a trend toward senior women quitting their jobs'.

In academic professional circles, early in the pandemic, Elizabeth Hannon, deputy editor at The British Journal for the Philosophy of Science, tweeted on April 18 about how women were submitting fewer papers during the coronavirus crisis. 'Negligible number of submissions to the journal from women in the last month. Never seen anything like it.'

The above paints a pretty bleak picture, where regardless of education, career experience and seniority, women are more adversely affected by the current working conditions and will continue to be post-pandemic.

One observation is to take the focus off new opportunities for remote and flexible working, and to properly recognise and support individuals undertaking unpaid care work. While remote and flexible working alleviate the need to travel into the workplace, they do not provide targeted support to hard-hit parents, or acknowledge the divergence in households where women spend three-times as many hours as men in unpaid care and domestic work.

Time to level up

Outside of politics and inside homes, there appears to be a glimmer of light where households have the opportunity to share about domestic duties, caring responsibilities and workloads. 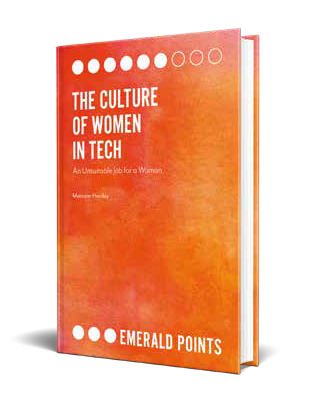 A study I am conducting with women in leadership roles in the technology sector demonstrates the need for a franker dialogue and rapid responses to support long-term flexible and remote working.

Many promises are being made concerning career advancement in other professional settings where different roles due to the pandemic have had to be prioritised. Ensuring transparency around the level of support and new career advancement pathways will be crucial to retaining parents in professional roles. We need to ensure women can see the light out of the perilous pit and acknowledge the different levels of inequalities women and men face.

You can buy Mariann Hardey's book The Culture of Women in Tech with 30% off until the end of March 2020 with code ENGAGEIWD.